UN Photo/Eskinder Debebe Secretary-General António Guterres briefs reporters on the situation in Ukraine at a podium in front of the the knotted gun Non-Violence sculpture at UN Headquarters in New York.
播放器加载中....

This year, Orthodox Holy Week is being observed under a “cloud of a war” that totally negates the Easter message of unity, the UN chief said on Tuesday, calling for a four-day humanitarian pause in Ukraine.

In five days, Ukrainians and Russians will mark Easter, a holiday that joins in celebration the Orthodox Christians in both Russia and Ukraine, as well as Catholic Ukrainians.

Easter is a season for renewal, resurrection and hope. It is a time for reflection on the meaning of suffering, sacrifice, death – and rebirth. It is meant to be a moment of unity,” Secretary-General António Guterres told journalist, speaking in front of the Non-Violence bronze sculpture at UN Headquarters in New York.

“Instead of a celebration of new life, this Easter coincides with a Russian offensive in eastern Ukraine”.

An intense concentration of forces and firepower continue to make the battle more violent, bloody and destructive, the top UN official lamented.

Moreover, the onslaught and terrible toll on civilians seen so far “could pale in comparison to the horror that lies ahead.”

“This cannot be allowed to happen. Hundreds of thousands of lives hang in the balance,” he underscored.

Against the backdrop of many failed “good-faith efforts” by numerous parties to reach a ceasefire in Ukraine, the Secretary-General called for a four-day Holy Week humanitarian pause beginning on Holy Thursday and running through Easter Sunday, 24 April, to allow for a series of humanitarian corridors to open.

He explained that a humanitarian pause would provide the necessary conditions to meet two crucial imperatives, beginning with safe passage of all civilians willing to leave the areas of current and expected confrontation.

This would be done in coordination with the International Committee of the Red Cross.

Secondly, beyond humanitarian operations already taking place, a pause would allow for the safe delivery of lifesaving humanitarian aid to people in the hardest-hit areas such as Mariupol, Kherson, Donetsk and Luhansk.

“The United Nations is ready to send humanitarian aid convoys during this period to these locations,” he assured. “We are submitting detailed plans to the parties”.

The UN chief painted a heartbreaking picture of people without food, water, supplies to treat the sick and wounded, or simply to live day-to-day.

“More than 12 million people need humanitarian assistance in Ukraine today,” he said, with over one-third located in Mariupol, Kherson, Donetsk and Luhansk.

“We anticipate that this figure will increase to 15.7 million – that’s about 40 per cent of all Ukrainians still left in the country”.

There is “a measure of progress to build upon,” the UN chief said, noting that over the past seven weeks, some 2.5 million people have been provided with assistance, including many in the east.

“For all these life-or-death reasons, I call on Russians and Ukrainians to silence the guns and forge a path to safety for so many at immediate risk,” he appealed.

“The four-day Easter period should be a moment to unite around saving lives and furthering dialogue to end the suffering in Ukraine”.

The Secretary-General welcomed their support and “inspired by Holy Week and all that it represents”, urged all parties and all champions of peace around the world to join his Easter appeal.

“Save lives. Stop the bloodshed and destruction. Open a window for dialogue and peace. Keep faith with the meaning and the message of Easter,” he concluded. 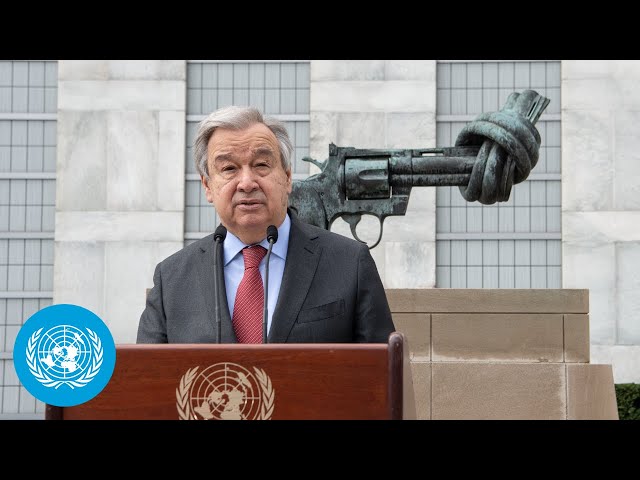