NEW YORK, UNITED STATES OF AMERICA, Friday, 23 September 2022. The African Renaissance and Diaspora Network (ARDN) had the honour to present to His Excellency, Felix Antoine Tshilombo Tshisekedi, President of the Democratic Republic of the Congo (DRC), its 2022 African Leadership Award, in a  ceremony, during His Excellency's recent mission to New York in connection with the 77th High-Level Debate of the United Nations General Assembly.

The award recognized His Excellency for his exemplary  leadership in DRC, his Pan-African vision which places women and youth at the heart of his Equal Opportunities Policy, his commitment to the principles of Positive Masculinity as Chair of the African Union, and his decisive action to protect the environment of DRC's forests.

At a bilateral meeting between His Excellency, President Tshisekedi, and Dr. Djibril Diallo, President and CEO of ARDN, before the award ceremony, His Excellency pledged his strong and continued support for ARDN's Red Card Campaign to put an end to all forms of discrimination and violence against women and girls, including, inter alia,  follow up to the Kinshasa Campaign activities which kicked off on 31 May 2022, the international launch of the  Red Card Campaign in November 2022, and the implementation of the Campaign at the  forthcoming African Union Summit. 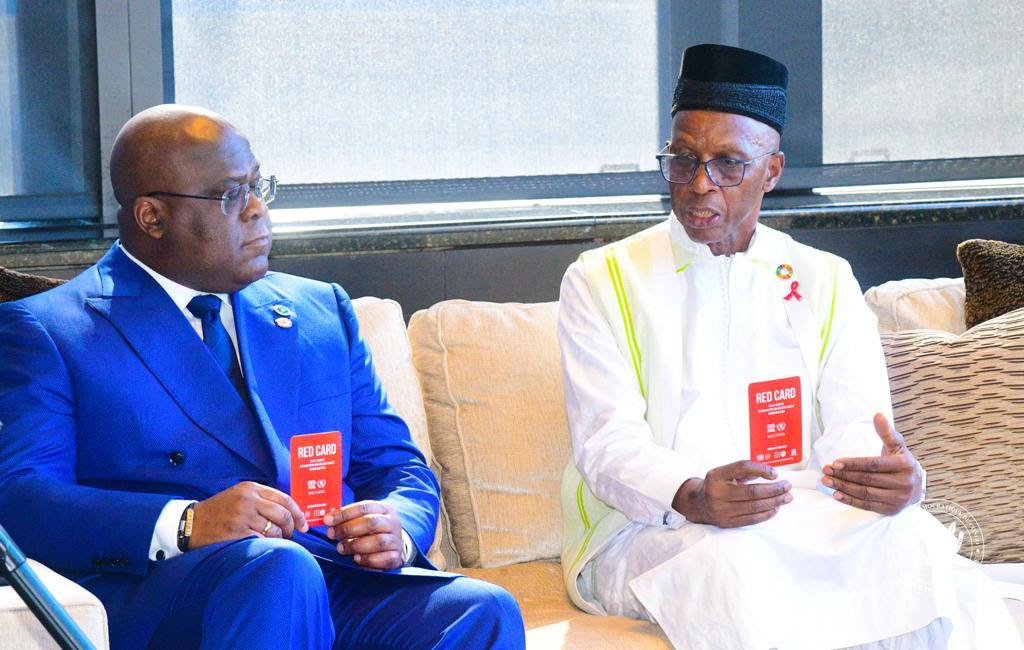 "Women are the future of a nation," said His Excellency, President Tshisekedi. "It is the women who develop the nation from procreation but also through education, the values they instill in children but also in the family."

"President Tshisekedi convened the first Summit on positive masculinity to mobilize boys and men in efforts to accelerate the achievement of SDG #5 during [his] tenure as Chair of the African Union, and made equality and the environment cornerstone policies of the DRC," said Dr. Diallo. "These add to an illustrious personal story that can serve as a source of inspiration to other African Heads of State and  to leaders everywhere."

Every year, at its Africa Open for Business Summit, ARDN recognizes luminaries for their leadership and contributions to driving positive change in Africa, including its 6th region, the African diaspora. A video of His Excellency's statement upon receiving the award will be played at this year's Summit, which will be held on Thursday, 29 September 2022, at 3:00pm EDT, in the Trusteeship Council Chambers at the United Nations Headquarters in New York.

The theme of this year's Summit is "Economic Empowerment of Women through the Africa Continental Free Trade Area." It is organizated in collaboration with the Permanent Mission of the Republic of Senegal to the United Nations, UNFPA, UN Women, UNDP Africa Bureau and UN Habitat.
ABOUT ARDN
ARDN is an internationally operating NGO headquartered in New York, with the status of a United States 501(c)(3) public charity. ARDN’s mission is to accelerate the attainment of the African renaissance by advocating for and supporting United Nations programs and priorities. To this end, ARDN mobilizes the passion of government, educators, artists, intellectuals, the private sector, civil society and youth, using the power of art, sport and culture as vectors for creating a better world. ARDN serves as the Secretariat for the Global Alliance of Mayors and Leaders from Africa and of African Descent.

ABOUT THE RED CARD CAMPAIGN
Women’s rights are human rights. In the game of football (soccer), a red card symbolizes a significant infraction of the rules. The ARDN Red Card Campaign seeks to mobilize individuals from all sectors of society to commit to giving a red card to all forms of discrimination and violence against women and girls.